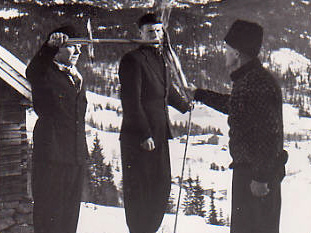 Friday February 15. 1952 the Winter Olympic Flame was lit in Oslo. Two days before, the pinewood torch was lit in Sondre Norheims cottage, Øverbø, in Morgedal.

The ceremony takes place on February 13, 1952. From the fireplace inside the Sondre cottage, the pinewood torch is lit by Olav Bjaaland, a ski veteran who also participated in the Roald Amundsen South Pole Expedition.

The story about the Winter Olympic Flame can you read more about here. Thanks to Halvor Kleppen for his contribution to the history.

The beginning of the Winter Olympics