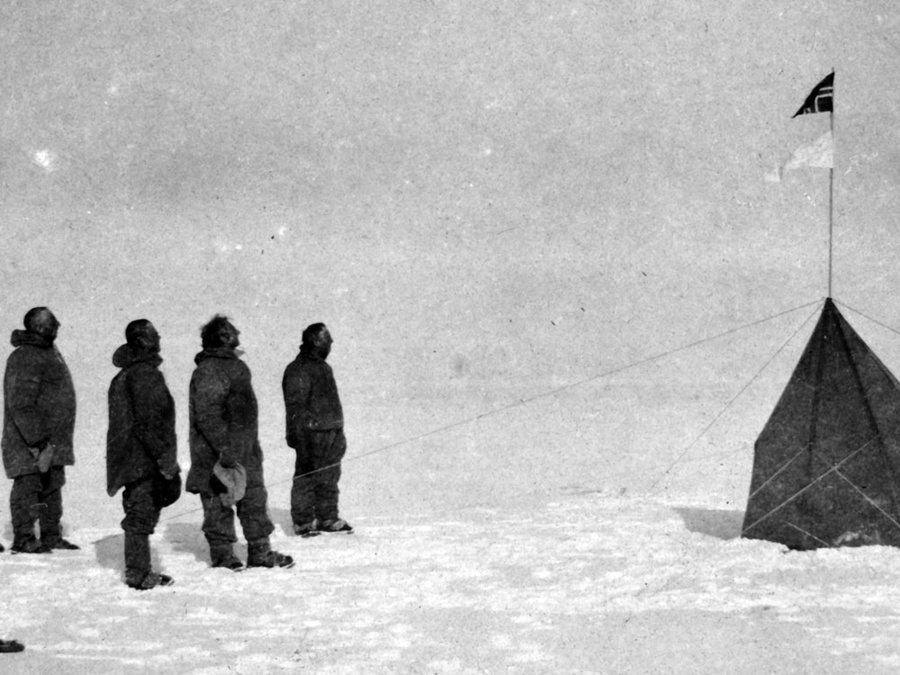 Olav Bjaaland  was a Norwegian ski champion from Morgedal in Telemark. In 1911, he was one of the first five men to reach the South Pole as part of an expedition led by Roald Amundsen.

Morgedal, a small village in Telemark, is known in the world of skiing as the cradle of modern ski sport. Olav Bjaaland, born 1873 at Suigard Bjaaland farm was one of several Morgedal-natives who nurtured his inheritance from Sondre Norheim and Torjus and Mikkel Hemmestveit.

Olav was a regular on the ski slopes, and his pine skis often broke during the wild ski games. His father was tired of constantly having to make new skis, so Olav had to quickly learn to make his own. Little did he know that this would lead to far greater tasks.

In 1902 he won the King’s Cup in the anniversary race in Holmenkollen, exactly 10 years after another Morgedal-native, Svein Sollid.

In 1909, Olav Bjaaland travelled to Chamonix in France as participant in a big international race, which he won. On their trip the Norwegian competitors met Roald Amundsen. It was then known that Amundsen planned an expedition to the North Pole with the ship Fram.

During dinner at a restaurant in Lübeck hosted by Amundsen, Bjaaland said, «It sure would be fun to accompany you to the North Pole.» «Oh, yes?» replied Amundsen, «If you really mean that, there might be a way. But consider it very carefully, because it won’t be all fun!»

Quoted from Olav Bjaaland’s diary:
June 12th, 1910: ”Had my first turn at the helm today, from 3 to 4 in the afternoon. We are headed Southwest by South, and you can imagine that the ship made some graceful turns towards the West and South because the Fram is slow to turn and constantly changes course if you don’t adjust in time. But it was a wonderful hour. Think about it: To be allowed to steer the Fram, this historic craft that has brought our country so much honour.»

January 11th, 1911: «Finally we caught sight of the ice barrier today. A strange feeling grips one at such a sight. In front of you this Great Wall of China shines, up to 100 feet high.»

January means fall in Antarctica. Framheim was established four kilometers from the edge of the Ross ice-shelf and the «timbermen» Jørgen Stubberud and Olav Bjaaland were given the responsibility for building the house that measured 8 by 4 metres.

For protection of the sled dogs and to store equipment, 14 big tents were set up around the house, «according to a plan that was laid out beforehand» as Amundsen relates.

Olav Bjaaland moved into the new workshop where walls, floor and ceiling were made of hard-packed, solid snow. His task was to make sleds and skiing equipment better and lighter without negatively affecting quality.

Roald Amundsen wrote the following in his diary May 23rd:

«Bjaaland is now working on the sleds in the new workshop. It turns out that the old sleds’ weight can be reduced considerably. All the zinc is being removed, since it is not needed on this hard snow surface. The cargo runners are limited to half» and on May 27th: «The old Fram-sleds have been reduced from 50 to 35 [kg] without compromising strength.»

Roald Amundsen, Oscar Wisting, Helmer Hansen, Sverre Hassel and Olav Bjaaland were the five men who on October 20th, 1910 began the journey from Framheim to the South Pole. With four sleds and 13 dogs pulling each sled they set off on a trip from which no one knew if or when they would return.

The Antarctic plateau lies at 3000 metres above sea level, and on November 18th Bjaaland wrote: «Yes, now the terrible ascent has begun.» In his books, Amundsen wrote: «It was a pleasure to watch Bjaaland use his skis up there. One could see that he had climbed a hill before.»

«Oh, if you, Mother, and Saamund – and you T. and Svein and Helga and Hans, knew that I am now sitting here at the South Pole writing this, I am sure you would rejoice for me. It is flat as on Morgedal’s lake here, with good skiing conditions. All the men joined in planting the flag that flapped so hard in the wind that the silk cloth ripped.» Olav Bjaaland, December 14th, 1911.

Finally the South Pole had been conquered. Olav Bjaaland surprised everyone by presenting the men with cigars to celebrate, and he gave a speech. The next few days were spent cross-checking that they really were at 90 degrees South latitude. In the evening on December the 18th, the return trip to Framheim began.

«At Framheim once again. Thank God we are here again and in good health and spirits.», Olav writes in his diary dated January 26th , 1912: 99 days after they left Framheim heading South.

Equipment was loaded back on to the ship Fram, and on January the 30th they sailed away from Antarctica; Tired, but certain that they had been the first to reach the Pole.

After his return home, Bjaaland established a ski-making factory in Kviteseid. He married Åsne Djuve and they moved to her childhood home of Djuve in Dalane.At the start of the winter Olympic Games in Oslo in 1952, Bjaaland was given the honor of lighting the olympic torch in the cabin where Sondre Norheim was born at Øverbø in Morgedal. From 1958 until he died in 1961, Olav Bjaaland received an honorary state pension.