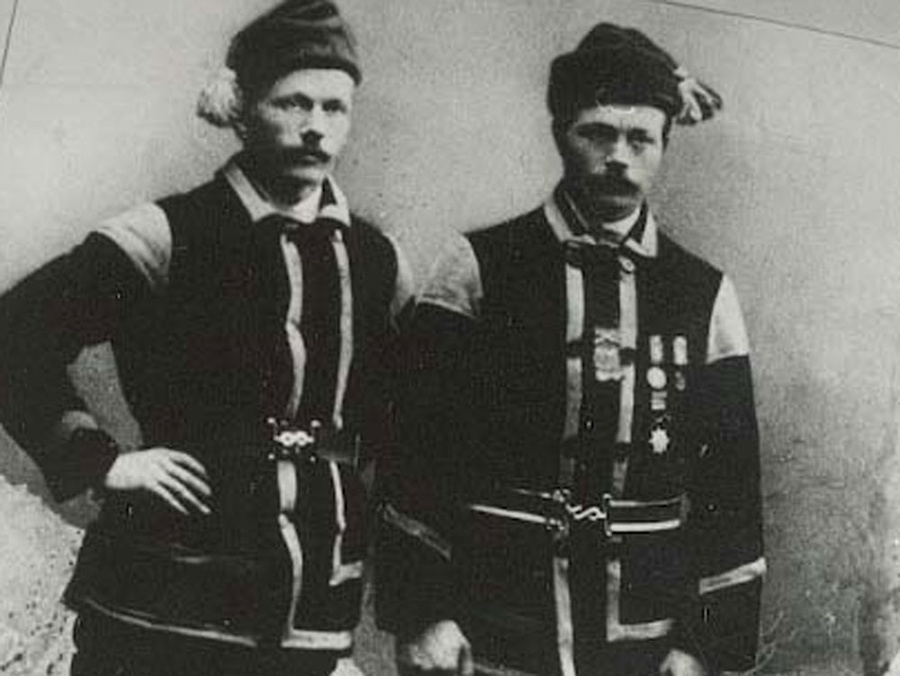 Both Torjus and Mikkjel Hemmestveit were from the village of Morgedal in Telemark. In USA they got the name «The crazy Norwegians from the North Pole».

In Aftenposten dated January 10th, 1881 there was an advertisement:

«An old Telemarking and his two sons intend, if enough people sign up, to organize classes in skiing and complete education in the treatment of skis, mounting of birch root bindings, and so forth.»

This is generally accepted as the world’s first ski school, and the instructors were Torjus Hemmestveit (born November 13th, 1860; Died June 9th, 1930) and his brother Mikkel Hemmestveit (born March 6th, 1863; Died April 22nd, 1957). The old Telemarking was their father Torjus (1826-1910) who was a reputable ski maker, with among other honors prizes for his skis from exhibitions in Oslo.

Torjus and Mikkel grew up on Nigard Hemmestveit farm (the lower Hemmestveit farm), and learned their ski-technique from Sondre Norheim (born June 10th, 1825; Died March 9th, 1897). Sondre was not one to hesitate, but if he was late one Sunday morning, the boys hurried to Norheim to fetch him.

They most of all enjoyed so called ‘sprøytehopp,» performed on a ski jump with a sharply inclined take-off ramp, and one winter when they were 12-14 years old Torjus had an accident during such a jump. He jumped with a single pole, and landed on the pole causing a terrible wound on his back. The injury was so great that his father had to fetch the doctor later that night. His brother Mikkel was devastated and said he never wanted to jump on skis again. He brought out his pine skis and placed them on the chopping block. Fortunately he was halted just as he intended to destroy the skis. After a few weeks, Torjus was back on his feet with no further consequences from his injury.

The next winter they were back at it, but they had learned one important lesson: The long pole was laid aside, and instead they held a small stick in their hand that they could use to pick lumps of snow from their boots and bindings before they jumped. The habit of holding on to something was hard to break; Even a small stick was sufficient, according to Mikkel.

In 1879, Torjus takes part in the Husebyrennet ski-jumping competition (in Christiania/present-day Oslo). He participates in the youngest age group.

«It was such a small jump, we were totally disheartened» he recalled. Later both he and Mikkel took part in several more competitions, and they brought home many prizes.

In 1881, Torjus and Mikkel brought with them 70 pairs of skis to Christiania (present-day Oslo), and started their ski school during the second week of January. In addition to learning Telemark-turns and the Telemark landing, the participants learned upkeep of skis and bindings from Torjus’ and Mikkel’s father, Torjus Hemmestveit.

There were several more ski-schools that winter. On February 5th, the Husebyrennet competition was held, and in the Aftenposten newspaper of February 13th one could read an advertisement announcing that first prize-winner Aasmund Vetlesen Brekke and fifth prize-winner Sveinung Svalastoga are also conducting a ski school.

The girls and ladies were taught at Dietrichsons Løkke (open city lot) in Ullevoldveien 49.  A journalist wrote the following about what he observed: «The sport of skiing will probably – before long – become as favored a sport among the ladies as that of skating.»

The boys and gentlemen were taught in «the hills north of Professorbyen (residential neighborhood), north of Gamle Aker church.» The terrain was a bit more challenging, and it was on these slopes that Sondre Norheim had shown his tricks three years prior.

Torjus and Mikkel travel to Husebybakken several times and return to Morgedal with several first-prizes and King’s Cups. 1888 was a good year for Torjus. On the 5th and 6th of February, he won the combined competition at Huseby. Friday and Saturday were spent preparing the cross-country trail which was a 25-kilometer circuit. On Sunday, February 5th, 36 competitors show up, and Torjus wins with a time of 2:07:24, approximately three minutes ahead of the second place contestant. The following day – Monday, February 6th– is the ski-jumping competition and according to a complicated set of rules the competitors bring different types of penalty points with them from the cross-country portion. Torjus is once again the better man and wins the King’s Cup.

The following day – Tuesday, February 7th – the World’s first 50 kilometer cross-country competition takes place. In November 1887 one could read in the papers, «If the weather is no hindrance, the afore-advertised 50-kilometer competition will be held on February 7th in Kristiania. First prize is 400 kroner in gold coin donated by a private citizen (Consul Axel Heiberg). Second prize is 80 kroner, and third prize 50 kroner, contributed by the Association for the Promotion of Skiing (Foreningen til Ski-Idrettens Fremme). Participants must have turned 21 years of age.» There were 32 competitors signed up, but only 17 that actually raced. Torjus Hemmestveit won with a strong time of 4:26:30. Runner up was Peder Eliassen from Løiten with a time of 4:28:48.

Torjus (1888) and Mikkel (1886) Hemmestveit both emigrated to America. They brought their skis along, and participated in ski competitions and ski-shows. In addition they continue to give ski instruction, so one can say that for a while they lived off of their profits from the ski-sport.

«The brothers Hemmestveit are now giving performances on skis in America,» «The crazy Norwegians,» and «Torjus Hemmestveit flies through air and cloud, and stands his 103 foot jump» are some of the summaries we find about Torjus and Mikkel in the papers from that time.  With his 103 foot jump, 36 feet above ground, Torjus is declared Champion of the World. Mikkel had received the same title two years prior for his 102 foot jump.

Mikkel moved home to Morgedal in 1894 and assumed ownership of the farm Suigard Kallåk. Torjus remained on his farm in the Red River Valley in Minnesota.

In 1928 they both received the Holmenkoll-medal (Norwegian skiing’s highest award for competitors), and Major Qvale (from the association) says among other things in his speech:

«The Hemmestveit-brothers performances served as a giant lever, elevating the sport of skiing. — They were altogether pioneers in all Norwegian, if not to say the World’s, ski-sport at the time.»

Torjus and Mikkel Hemmestveit and their skiing feats mark a transition in Norwegian skiing. After their heyday, hard-packed hills were being prepared where birch root bindings on pine skis without grooves and soft shoes made of cow or moose hide were no longer the right equipment for long jumps. A new time had arrived.